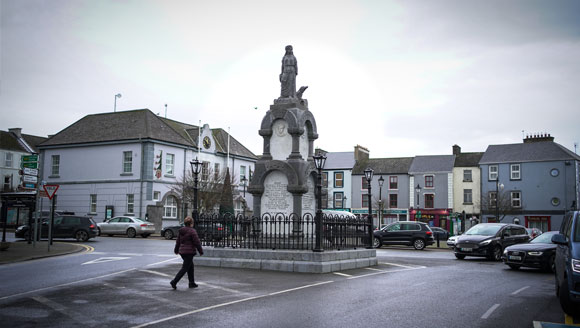 The project was managed by the Planning section of Clare County Council with input from Kilrush & District Historical Society and Kilrush Town Team. The works to the monument were completed by Mid-West Lime Ltd in collaboration with heritage blacksmith Brendan St. John and involved the full restoration of the stonework and wrought iron railings. All works were guided by conservation best practice.

The Manchester Martyrs’ Monument was erected in 1903. It was a longstanding ambition of the people of Kilrush to erect a monument to commemorate the memory of the Manchester Martyrs. William O’Meara Allen, Michael Larkin and William O Brien were executed in Salford, Manchester, for the successful rescue of a Fenian prisoner. Their execution in 1867 sparked demonstrations and marches both in Ireland and the UK. It saw a rise in nationalism that culminated in the Easter Rising of 1916. The commissioning and erection of the monument was made possible through raising funds from the local population and the Irish diaspora in America.

The monument is composed of a carved limestone statue of the Maid of Erin and her hound, sitting on top of a two-tier limestone pedestal. There are four marble plaques inset into each face of the pedestal. In 1921, the Maid of Erin statue was torn down by British Auxiliary forces. This saw the iron bars to the western side of the railings being damaged as the statue fell on them, and the Maid of Erin’s hand was broken. This damage is still visible today, with the fabric of the monument bearing the scars of a turbulent past.

Kilrush is a town which values its heritage dearly. The repair and restoration of the Manchester Martyrs’ Monument is a further continuation of heritage-led works within the town centre from which the local and visiting community will greatly benefit.  The monument is an important historic symbol and forms a backdrop to everyday life within Kilrush. The restoration works have safeguarded the future of this rich, artistic, and important cultural artefact. 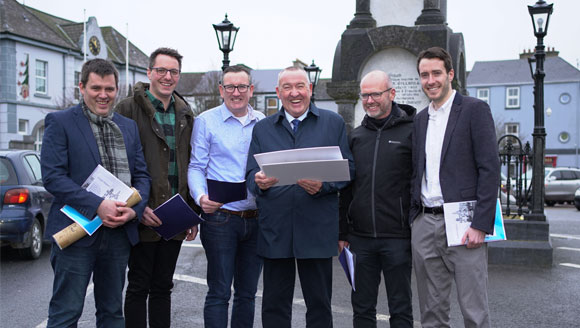 Welcoming the project, Cllr Ian Lynch, Clare County Council, said: “The Manchester Martyrs’ Monument is an important part of the history and heritage of Kilrush. It is a unique monument and a significant landmark that is highly valued by the local community. I was delighted to support this project through the allocation of GMA funds, and I would like to commend the Planning team at Clare County Council for delivering the restoration works to such a high standard.”

Pat Dowling, Chief Executive, Clare County Council, said: “The Manchester Martyrs’ Monument is a significant historical artefact of national importance. Kilrush is a town defined by its rich heritage and the restoration of the monument underlines Clare County Council’s commitment to safeguarding our built heritage. I would like to thank Minister Malcolm Noonan and the Department of Housing, Local Government and Heritage for supporting this excellent project.”

Paul Gleeson, Kilrush & District Historical Society, said: "Kilrush & District Historical Society (KDHS) welcomes the conservation of the Manchester Martyrs’ Monument by Clare County Council and its contractors in time for the 120th anniversary of the monument. The monument, now skilfully returned to its original glory, has played a pivotal role in the history of Kilrush. KDHS as a voluntary community group is delighted to have worked with Clare County Council and been part of this endeavour".

Charlie Glynn, Chair, Kilrush Town Team, said: “Maintaining and safeguarding of historic structures is an objective under Kilrush Town Team’s Community Strategy and we are pleased to see the Manchester Martyrs Monument conservation project come to fruition. Kilrush is one of only 27 Heritage Towns nationally and we welcome the continued capital investment by Clare County Council in our valuable built heritage. This is an excellent example of community groups collaborating with Clare County Council.”