The Atlantic Economic Corridor is nine counties, including County Clare, have joined forces to highlight the economic opportunity along Ireland’s Western seaboard, to drive interest in the West Coast as a great place to live and work, and to attract further investment to the region. 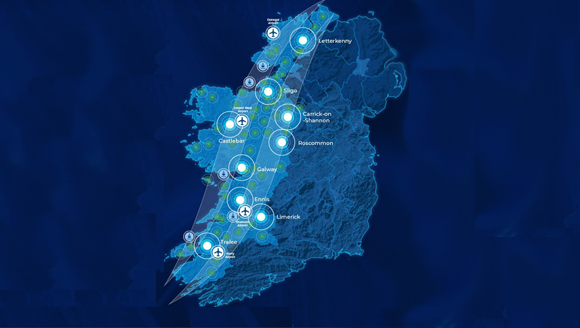 The Government’s Programme for a Partnership Government, May 2016, included a commitment to progress the concept of an Atlantic Economic Corridor (AEC) with the potential to deliver balanced national development by creating sufficient scale in the west of Ireland to match other areas, including Ireland’s thriving East Coast, in developing infrastructure, attracting Irish and multinational investment, and growing jobs and wealth in local communities.

The AEC region has a total population of 1.7 million people and is home to a wide range of successful businesses, including ambitious start-ups, established multinationals, and indigenous Irish firms prospering in global markets. The region boasts a number of higher education institutions producing a steady supply of graduates across a wide range of industries, making it an ideal location for enterprises wishing to tap into a highly skilled local workforce.

The development of the Atlantic Economic Corridor is a long-term collaborative initiative which requires cooperation between Ireland’s business community, national and local government, higher education sector, public bodies, and local communities. To this end, the Atlantic Economic Corridor Taskforce was established in March 2017 to progress the AEC initiative. The Taskforce is chaired by Minister of State Seán Kyne and includes senior representatives from the business sector, key Government Departments, other public bodies, and Third Level institutions.

A new online hub www.atlanticeconomiccorridor.ie was recently launched by Minister Kyne, which will act as a one-stop-shop offering information on the advice and supports available to people thinking of setting up a business in the region, and for those interested in relocating and creating an Atlantic-coast lifestyle for themselves and their families.

In addition, Clare County Council has appointed an AEC officer to support the work of the AEC Taskforce and to develop and promote the AEC initiative. One of the AEC Officer’s first tasks will be to carry out of an enterprise space audit for the town of Ennis.